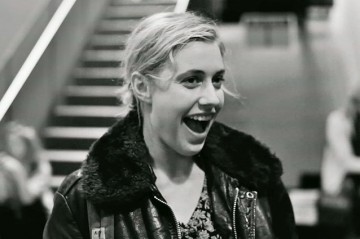 Frances Ha is a tricky movie to explain. While the story is simple, there’s a lot going on underneath. It’s funny, but melancholy too. Like its title character, it’s just completely unique – and that is a wonderful thing.

Frances (Greta Gerwig) is a bit of an oddball. An aspiring 27 year-old dancer, she marches to the beat of her own drum. When we first meet her, she’s living in New York City with her BFF Sophie (Mickey Sumner).  The two do everything together and would make a perfect love match – if both weren’t straight. “We’re like an old lesbian couple that don’t have sex” says Frances.

Frances is so dedicated to Sophie that she breaks up with her boyfriend after he asks her to move in with him rather than leave Sophie. But when Sophie decides to move out to a more expensive neighbourhood, Frances’ world slowly unravels. She moves from one place to another, and one situation to another – just trying to fit in.

With a dream of becoming a professional dancer, Frances is apprenticing as an understudy at a dance studio. Forever short on cash, she crashes on the couch with two male friends (played by Adam Driver from Girls and Michael Zegen) and tries to figure herself out. While everyone around her seems to have money, relationships and opportunities, Frances is jokingly labelled “un-datable” and pines for Sophie, who is growing  ever-more distant as her relationship with her boyfriend Patch (Patrick Heusinger) grows more serious. 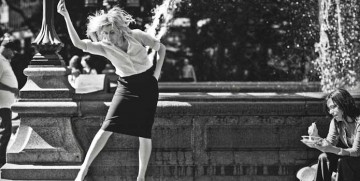 As someone who suffers from an acute case of  “third-party embarrassment” (watching people in embarrassing situations in shows like The Office or The Bachelor gets to me), I cringed as Frances tried to take Lev (Adam Driver) on  a date and couldn’t pay, or at dinner with friends when she said odd things. But this just proves that despite her awkwardness, she’s endearing enough to make you care for her.

Frances is one of the most refreshing female characters to show up on screen in quite some time. Very endearing but at the same time, it would be frustrating to live with her all the time. Hence, the “un-datable” label sort of rings true.  As she makes a series of interesting decisions, Frances is determined to do things her own way – even when help is offered. And that’s a refreshing thing to see.

Frances Ha is directed by Noah Baumbach (Greenberg, Margot At The Wedding). Because it’s shot in black and white  set in New York and is centered on dialogue, it’s a bit of an homage to Woody Allen’s Manhattan. Greta Gerwig co-wrote the screenplay with Baumbach (they are also a real-life couple) and her portrayal of Frances is so very human.

Frances is literally the guest who stays too long. Yet by the end of the movie, you don’t want her to go. Just like everyone else around her, Frances is in transition in her life. Determined to get to her dream even when reality seems so hopeless, Frances is doing it her own way. A quirky heroine on screen. What’s not to love about that?