You are here: Home / Entertainment / Disney’s NEWSIES Comes To The Toronto Stage
Share this...

Disney musical fans are thrilled that the Tony Award winning smash hit NEWSIES is on tour with a current engagement in Toronto at the Ed Mirvish Theatre until August 30. When it opened on Broadway in 2012, NEWSIES was intended to be a Broadway run of just 101 performances. Rave reviews and fans pushed the show to run a startling 1005 performances.

Set in New York City at the turn of the century, NEWSIES is inspired by the real-life Newsboy Strike of 1899. Lead character Jack Kelly, is a charismatic newsboy and leader of a ragged band of teenaged newsies, who dream of a better life far from the hardships of the streets. But when publishing titans Joseph Pulitzer and William Randolph Hearst eased distribution prices at the newsboys’ expense, Jack finds a cause to fight for and rallies the boys from across the city to strike for what’s right. 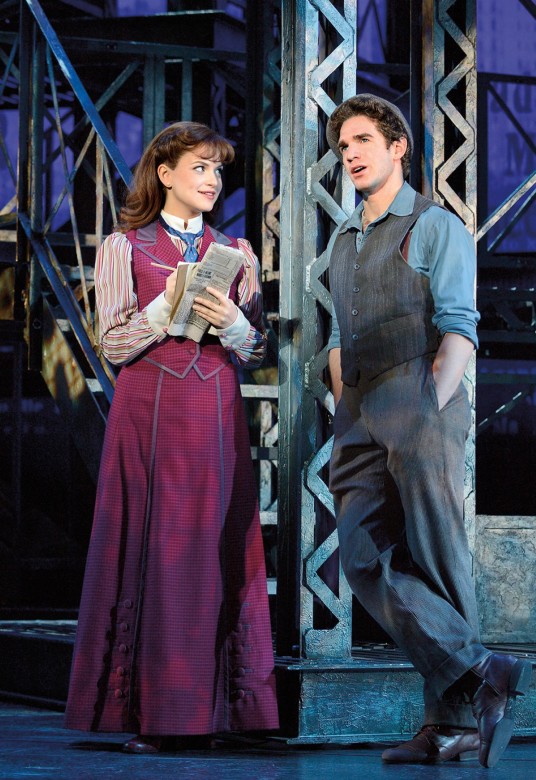 I had a chance to chat with Dan DeLuca, who plays Jack Kelly, and Stephanie Styles, who plays investigative reporter Katherine.

Sonya Davidson: The role of Katherine is different from the movie version that people may be familiar with at first. There was no Katherine in the movie?

Stephanie Styles: Yes, she wasn’t in the film but she was created for the musical. She’s the newspaper reporter and reviewed shows for the New York Sun but she was also interested in finding stories that she was more passionate about. She wanted something to spark her creativity and during the strike not only does she have interest in it but she also finds Jack Kelly who inspires her in a whole different way. So it’s really exciting getting to play this character and I learn from her every night.

SD: Have you put your own personality into the character of Katherine?

SS: I think whenever anyone approaches a character, they bring a little bit of themselves to it and it’s always different from anyone else who’s played the role. But what I think is exciting is that in real life I may be a little bit older than Katherine but I think when I was her age I was writing for my school newspaper too but she’s on this journey discovering things about herself in a new environment and that’s what I’m doing right now. I’ve just graduated from college so having this opportunity to go on the road with this rag-tag gang of actors for the show has been great.

SS: (laughs) They are like my family and we get to go out and explore new places. Learning how to do a show 8 times a week is great and I getting to do what I love is a blast!

SD: Dan, as Jack Kelly, you have the most physical demanding role in the show. So how do you this show eight times a week.

Dan DeLuca: Yeah, I hardly leave the stage! You have to find your inspirations and all of that stuff and you really have to do your homework and dive right in. You have to learn as much about this character as possible but I, personally, also try to learn something new about the character each and every day from the show. There’s always something new and interesting to find. I always say that acting is a living, breathing thing that is constantly changing and as people we’re always evolving. Something that I may learn in the morning can affect my show at night that would make me more knowledgable and hopefully put on a better show each time.

SD: Does the city vibe affect you in anyway? Or the reaction from the audience?

DD: Oh for sure! Some jokes land and some don’t. And that happens in the States too. Some States react strongly to our jokes but then sometimes not.

SS: Yes, that even happens day to day and not just by city to city. I remember we were in Orlando when the SuperBowl was happening and there was one joke about football and that night everyone laughed soooo hard at that joke! It’s fun to get the different reactions to the show.

SD: What amazes you about the story of Newsies?

SS: What amazed me is that these young men had to sell newspapers to provide for their lives and they were young too. They had to rally together to inform each other about the strike without having cellphones or Twitter!

SD: Could you imagine?

DD: Yeah, it would have been so much easier for them!

SS: And Katherine! She was only 17 or 18 years old and writing this front page story? She’s actually based on a real life reporter and this did happen. It’s pretty exciting and has opened my eyes to possibilities in a world that I’m really thankful for.

DD: Oh YEAHHHH! We both are! We were raised on it pretty religiously.

DD: (laughing) Yeah pretty much! We went to Orlando and when we opened the show in L.A. we got to go to Disneyland. Disney is pretty cool. You will always remember times you’ve been to Disney as a family and stuff like that. It’s all about making those magical memories that lasts your whole lifetime, you know? My whole iPod playlist is full of Disney tunes and not just from shows but also from the rides. I just love everything that the Disney company stands for and I’m inspired every day. I’ve just found so much joy and fulfillment. I think people always think of Disney is for kids but it’s so much more than that.

SD: So, who’s the show for? It’s not about princesses this time.

DD: The show definitely is for anyone and any age and boys will like it. We get great reactions from fans who tell us constantly that they love seeing that it’s cool to see boys dancing. There’s nothing girly about this show or princess-y. But what it does have for everyone is hope and faith and believing in something that I think our universe needs daily. We still need those reminders of standing up for what you believe in  and staying true to who you are.

SD: The message is pretty powerful.

DD: Yes, it’s truly inspiring and it’s about the underdogs — these kids that take on the titans of the publishing world and without the aid of social media. Imagine if they did have social media? Imagine what they could have done then? It’s pretty cool when you think about it and how they did it all with determination and no cellphones.

Disney’s NEWSIES is currently on stage until August 30, 2015 at the Ed Mirvish Theatre in Toronto. For more information visit mirvish.com

Thanks Stephanie and Dan!

“Stop making that noise, it makes me want to throw squirrels.” The sound of crackling plastic was driving my husband to the point of rodent … END_OF_DOCUMENT_TOKEN_TO_BE_REPLACED

Summer used to be magical. The hot weather, the outdoor adventures, the complete and total lack of responsibility. School was over for the year and … END_OF_DOCUMENT_TOKEN_TO_BE_REPLACED