You are here: Home / Entertainment / DAVID BOWIE IS….

Everyone I know has a favourite Bowie song or two, or three. He changed the face of music and was never one to shy away from pushing the creative envelope or himself. I hadn’t realized just how much he had done over the course of his career until visiting the new exhibition at the Art Gallery of Ontario.

DAVID BOWIE IS…. now here in Toronto and is the first stop in North America straight from the Victoria and Albert Museum, London. This incredibly dazzling exhibition is like opening a treasure chest full of hidden gems and well loved objects. Over 300 items from Bowie’s personal archives are on display as well as over 50 costumes. Rather than a chronological display his life, the exhibit is built around his career spanning 50 years and the different phases of interests he was passionate about. During the press conference curator Geoffrey Marsh mentioned that Bowie has over 75,000 items stored away in his personal archives. “He just didn’t want to throw anything away,” said Marsh. 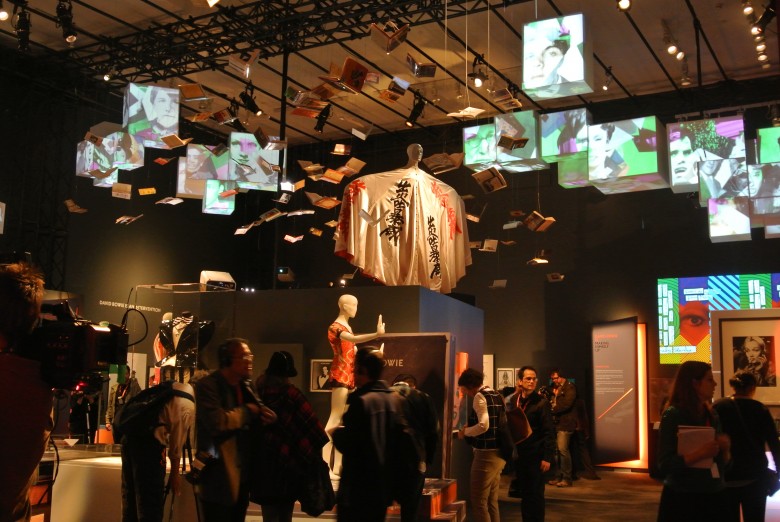 What is incredible to also learn is that Bowie is quite a private person and wasn’t expected to show up for this exhibition to make any appearance despite his recent release of “The Next Day”. The exhibition is all carefully curated by Geoffrey Marsh and Victoria Broackes of the Victoria and Albert Museum. While you experience this collection, the question of who DAVID BOWIE IS …is really left to your own interpretation.

David Bowie is …more than a one-dimensional artist. 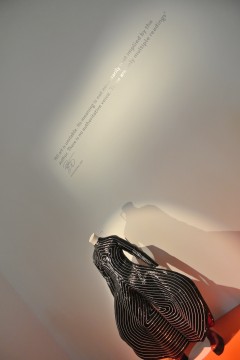 When you first walk into the exhibition you come face to face with the “Tokyo Pop” stage costume by Kansai Yamamoto and you will notice the wall text: “All art is unstable. Its meaning is not necessarily that implied by the author. There is is no authoritative voice. There are only multiple readings”.

Wrapping around the wall, and with Sennheiser headphones on, you’ll enter a time warp of music and amazing artifacts. The exhibit spans two-floors at the AGO and it not only features album covers, concert footages, costumes and works of art that are all cool to see. It also includes Bowie’s thought process and creative steps in many of his works. This is pretty neat to see especially for youngsters. It shows that not everything comes easy even for superstars. There is work involved.

This is definitely worth checking out with kids. In conjunction with DAVID BOWIE IS, the AGO is launching its first Family Sunday of the season on Oct. 27 from 1 to 4 p.m. This Bowie-inspired Family Sunday will feature costume-making stations, an all-day dance party, family karaoke, a musical tour of the AGO’s collections and more. Families are encouraged to attend in Bowie-themed attire. Family Sundays are included with regular Gallery admission.

One hour wasn’t enough for me. I need to get back there!

DAVID BOWIE IS …at the Art Gallery of Ontario until November 27, 2013, and I strongly urge you to get the full experience with the Sennheiser headphones available at the exhibition.

For more information on the exhibition and to purchase tickets online visit ago.net 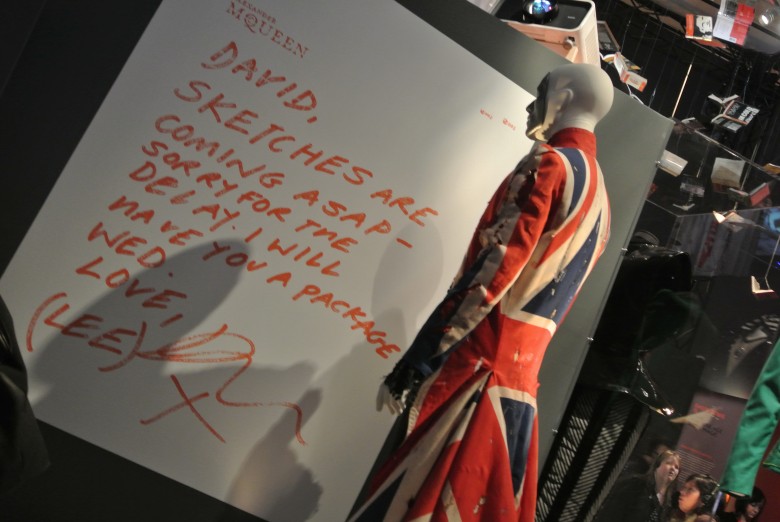 Here’s a bit of David Bowie trivia for you…go and impress your friends!

Now, to get you in the mood….one of my favourites! What was your favourite BOWIE song?