You are here: Home / Life / Design/Decor / Colin and Justin chats about their rustic escape to cottage country!

You just gotta love these guys! They are sooooo much fun and together they are non-stop entertainment. I’ve already been inspired by them but now the design duo (and city slickers) are taking their big ideas to the great white north!  Finding their own cottage was an adventure in itself and it was all captured for us to see in their brand new 13-episode television series, Cabin Pressures, airing on Cottage Life Tuesdays at 10 pm ET/PT.

Did they make their dreams come true? In the first episode it’s all about the thrill of the find. It’s taken a few years, but Colin and Justin are convinced they’ll love the Cottage Lifestyle. With friends Cherri and David, they’ve decided to purchase a true rustic retreat to make their dream a reality. The design duo falls in love with a lakeside log home and rather than being daunted by a ‘fixer-upper’, they’re overjoyed at the thought of renovating to make a very upscale, urban feeling retreat. Now they just have to be sure they get the right place. Then the renos begin.

I had the opportunity to chat with Colin and Justin and their latest adventure and why they decided to take the plunge…..

We like to make the trek to “cottage country” especially in our summer months, did either of you grow up enjoying these sort of getaways with family or friends?

Being two Scottish boys, we tend to travel to France, Spain & Italy as flights are so inexpensive.  So the concept of a wilderness home is new to us.  The idea of us owning a log cabin in Canada still blows us away.  We feel like frontiersmen and love how we’ve embraced the bush!

What’s your fondest memories of cottage life and when did you start cottaging? Young?

Lol – our cottaging started 8 years ago, so yes, we were a bit younger! Honestly, being close to nature – and living in a log cabin – feels escapist and still somehow alien to us.  In the nicest possible way, you understand!  So we’re kind of having our new cottage experience right now… and yes we think of it with tremendous fondness!

We obsessed about having internet at the cottage and installed a Rogers hub as soon as we took possession.  And then?  Well let’s just say we didn’t turn it on for 10 whole days!! It’s the cottage effect – we’ve learned we can actually live without internet… for 10 days, certainly!

What was one of the challenges that you had to face when going through the process of making your ideal cottage? I heard about bedbugs or lice? is that true?

No bedbugs or lice thankfully – logistical matter, we quickly learned, are the main challenge during a cottage reno!  Bringing items in from the city and getting deliveries to Muskoka became a real issue.  You have to plan everything with military precision and double up on deliveries as much as possible to keep costs down.  Mice also feature heavily in the new wilderness world of Colin and Justin but we’ve learned that they hate mint – that’s the smell not the colour.  And so, using mint as our weapon of choice, and without further ado, we banished all traces of Mickey and his pals without the need to despatch them from this mortal coil. 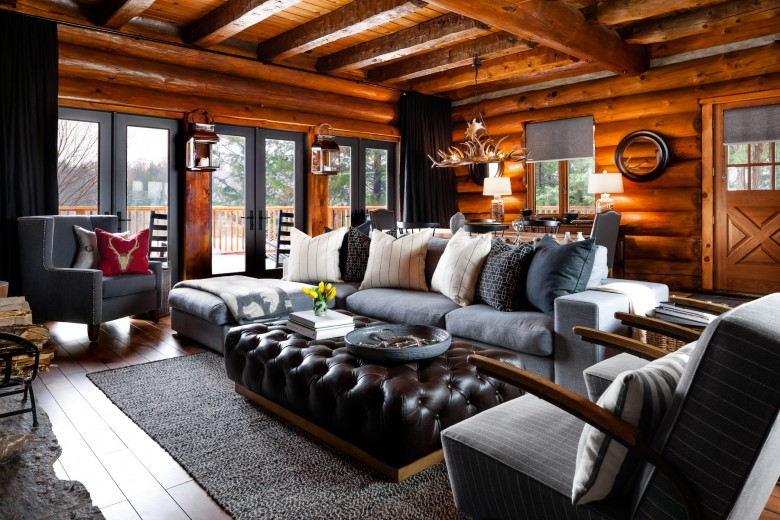 When I think of cottages, I think of plaid throws, rustic wood interiors, and a mish-mash of hand me down tin tableware. (it’s been a while)..what are some of your design tips to keep in mind if someone wants to update?

Create a singular identify – you can transform mismatched furniture, for example, with a lick of paint to provide design continuity.  Simply decide on a look and colour scheme and stick to it.

“It’s cool, not kitsch.  And it’s not about spending too much money.”

Embrace the surroundings – our log cabin is positioned on a hill close to the lake, so the views SHOULD have been gorgeous.  But the existing windows were really small.  Our remedy?  Well, it wasn’t rocket science – we simply opened up the space and connected to the lake by replacing two small windows with three setts of full size French doors.

Without being tacky, ‘plant’ a few design direction pieces to suggest your look.  We have Norwegian bear print blankets, rope filled glass jar lamps and a faux antler chandelier to suggest blissful, cottage lifestyle and the great outdoors.  It’s cool, not kitsch.  And it’s not about spending too much money.  Our jar lamps, for example, cost just $60 each from Homesense in Barrie!

Too much old = old!  So balance out your proposed aesthetic with a few carefully chosen modern pieces.  We popped a modern Italian style sectional sofa and a second hand sideboard from a barn in our log built living room.  The mix of modern and rustic works really well to create an individual look.

Remember that one man’s old is someone’s gold, so don’t throw anything away!  Reuse what you can, or sell it online to generate additional income.  We sold all of the chattels on Kijiji – it was a great way to share pieces, make some money and meet some new friends too.