Save the date! This concert is sure to be a fun one! Join in the fun at Toronto’s outdoor waterfront event hosted by Nick Cannon featuring performances by Victoria Duffield, Alicia Moffet, 4Count, Rebel Coast and stars of YTV’s Some Assembly Required.

Alongside Nick Cannon, YTV on-air personalities, The Zone’s Carlos Bustamante, Mark “Suki” Suknanan, Rachel Bonnetta and Undercover High’s Lisa Gilroy will be in the crowd as roving reporters between sets and throughout the event. Dancers from Jade’s Hip Hop Academy, flyboarders, wakeboarders, extreme bubble artists, amazing magicians, jugglers, stilt walkers, unicyclists and more acts are on deck for a day of non-stop action.

· Victoria Duffield – The multi-talented pop star released her sophomore album, Accelerate, this spring, featuring the hit single “More Than Friends,” which is the follow-up to her debut JUNO Award-nominated 2012 album Shut Up and Dance. Victoria was also a Top 6 finalist on The Next Star Season 3.

· 4Count – Brought together and managed by Nick Cannon, and starring in a YTV show set to premiere later this year, this emerging boy band will perform inspiring and energetic singles from their debut album that features their signature upbeat sounds and killer dance moves.

· Rebel Coast – Fresh off their win of The Next Star: SuperGroup and solo concerts in Montreal and Toronto, the boy band will perform their singles “We Are The Brave” and “Don’t Stop Now.”

· Some Assembly Required Stars – Charlie Storwick (The Next Star Season 4 winner) and Kolton Stewart will entertainment the audience with musical performances. 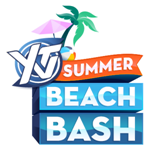 Fans can keep a close eye on www.ytv.com/summerbeachbash, #YTVBeachBash, @YTVofficial on Instagram, @YTV on Twitter and YTV’s Facebook page for exciting announcements on musical acts to be added to the roster in the coming weeks.