You are here: Home / Entertainment / Celebrity / Squawking With Lainey!

So many people know Elaine Lui as Lainey Gossip. You may recognize her from her popular celebrity gossip site of the same name, her red carpet reporting and as co-host on CTV’s daytime television show The Social. Whenever I mention her name to my friends, they all squeal “Oooh… I lurv her! She always gets the best scoop on the celebs!”

Recently she published a book titled Listen To The Squawking Chicken but it’s not a celebrity tell all. Noooope. It’s a personal memoir… sort of. It’s more about her upbringing and her relationship with her mom. It’s a terrific peek inside the complex Chinese cultural upbringing that I’ve often tried to explain to my non-Chinese friends. It’s often funny and sometimes shocking. But in true Lainey style, it is offered up in an entertaining way. 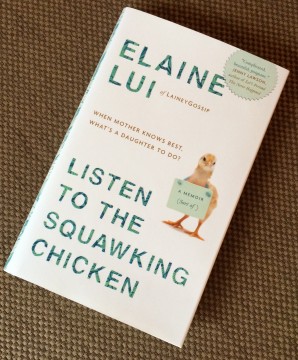 You know I had to get my hands on it and I was thrilled to have a chance to speak with Lainey during her national press tour.

First of all, I want to tell you that chatting with Lainey is what you may envision. Her fun personality on television is what you you get. It’s like chatting with a girlfriend over coffee. She’s got nothing to hide and she’s hilarious. When she realized that I also spoke Cantonese, it made our interview more special. There was no need for explanation. I knew where she was coming from.

Me: Our culture is very superstitious… are you personally?

Me: I’m the same way! I was taught through my life that if you don’t follow superstitions, you’d never know what could  or would happen.

Lainey: Yes! We always ask my mother “Well, what about people who don’t know? Do you let them do the things they’re not suppose to do?” and she would say it would be blind bad luck. When you know about it it’s almost willful bad luck.

“Most people think I’m exaggerating… she squawks like a chicken, she is totally nuts, and I am totally dependent on her.”

Me: So how does your mom feel about being called “the squawking chicken?”

Lainey: Well, that was her name growing up and her nickname that she lived with during her teen years and all through her adulthood. She wears it with pride! She sees it as a name that means that nobody can take advantage of her. So she loves her nickname!

Me: Did you have a nickname as well?

Lainey: No, I never had one that really stuck or was as widely used as hers. Everybody in the village where she grew up  knew her by that name and still call her that when she visits. I feel like more people know her by her nickname than her real name.

Me: I was laughing at that name because everyone in my family has a nickname given by my mother. My nickname when I was a child was “Sun Ja Ban” named after a Chinese candy and that stuck. I don’t know why.

Lainey: Oh! I love those!

Me: So, what was your mom’s reaction to the book?

Lainey: She actually hasn’t read the book but she knows what’s in the book… I’ve gone through it with her. She’s thrilled about the book and of course, she’s especially excited because she’s in the spotlight. She loves that everyone is talking about her so she’s obviously living her moment. As for her friends, I wonder sometimes how they are reacting to it because my mother is a show off. She’s a bragger so she’s probably talking about it all the time. I wonder if they’re getting tired of her talking about the book (laughs).

Me: When you started Lainey Gossip, how did your mother react to that? It isn’t something a Chinese parent would think of as a good career choice like being a doctor, dentist or lawyer.

Lainey: My mother doesn’t exactly understand how the internet works so she really doesn’t understand what the mechanics of what my job looks like. But she does understand that it’s a gossip column. I know you understand cantonese so I’ll tell you this… my mom would say “gong bakwa yeh, yun sick”

Lainey: The basic translation for those who don’t understand is, “talk shit for a living”. Mom thinks it’s hilarious… and of course, she takes all the credit for it because that’s what I’ve learned from her when I was younger and hanging out with her at the Mah Jong tables. You know, right? That’s what you do when you play Mah Jong!

LISTEN TO THE SQUAWKING CHICKEN by Elaine Lui is published by Random House Canada. Also available for download for eReaders.

Thanks to Lainey for taking the time out of her busy press tour for chatting about her latest book!