You are here: Home / Entertainment / Celebrity / SIMON COWELL IS GOING TO BE A DAD 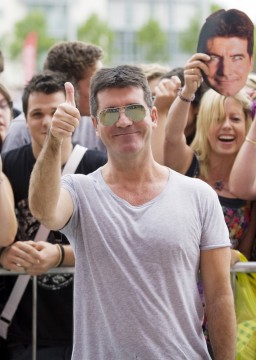 The ladies’ man who was engaged to American Idol makeup artist Mezhgan Hussainy and dated Carmen Electra is about to become a dad.  According to US Weekly, X-Factor judge Simon Cowell (53) is  expecting his first child with Lauren Silverman, 36. She’s a New York socialite and is about 10 weeks pregnant.

I find this interesting in so many ways.

First, Silverman is married to Cowell’s BFF – Andrew Silverman. US Weekly states that as the Silvermans’ marriage was disintegrating, Cowell swooped in. Whoops. The Silvermans have filed for divorce.

Second, Simon Cowell having a child at all is surprising. I say this because he’s publicly said he wasn’t too keen on the idea of having kids in the first place. He is also a notorious workaholic so kids don’t fit well into a busy work schedule. But he seemed to be warming up to the idea as last year, stating in an interview with AOL Music in March 2012:

“I do really, really like kids, because I can talk to them and listen to them. The problem has always been how much time you need to devote to bringing up kids and I’ve always dedicated all my life to work, and at 52, I’ve probably missed the opportunity.”

Third, Cowell is also widely known to be a man who loves himself – unconditionally. He’s made no secret about his vanity. Earlier this year, he outlined his “beauty regime” to the UK’s Daily Mail. It included “Hundreds of press-ups a day, work-outs four times a week, regular Botox and colonic irrigation treatments … not to mention vitamin injections administered by a nurse.” Nice. Will be interesting to see if he can keep it up during nightly feedings.

And lastly, there’s the drama. Cowell loves and craves drama! After ending his 18-month engagement to Hussainy, Cowell told the SUN “I’m attracted to crazy women. I encourage crazy behavior and I make them crazy. I’m attracted to certain personalities who are difficult to control. So there are tantrums, tears and fights, which is all part of the drama. My life is really odd.”

But everyone’s allowed to change their mind and it will be great to see Cowell embrace fatherhood. Here’s hoping that in Lauren Silverman, he’s finally found someone who can be a wonderful mom to his  child and a calming influence – without the drama. Congratulations to the parents-to-be!