You are here: Home / Reviews / Books / An Interview with Anna Quindlen 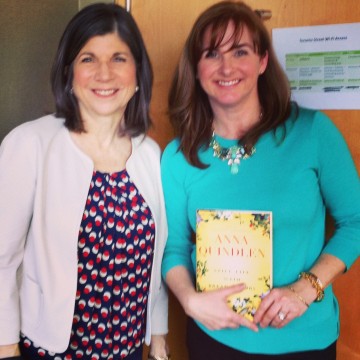 Writing for UrbanMoms has awarded me a multitude of amazing opportunities. I have traveled to new places; alone and with my family. I have discovered new products, new books, new trends and new restaurants, and been able to share them with my readers. I’ve met other wonderful writers and many incredible celebrities. Last month, I was offered the opportunity to interview Anna Quindlen, who has long been a personal hero in many respects. The time I spent with her is one of the most amazing gifts that UrbanMoms has given me.

Anna Quindlen was born on July 8, 1952, in Philadelphia, Pennsylvania. As a teenager her first job was as a copy girl at The New York Times. After college, Quindlen became a reporter for The New York Post before returning to the Times in 1977. Later, she was promoted to deputy metropolitan editor at the Times and wrote a Pulitzer Prize-winning op-ed column from 1981-1994. After leaving the Times in 1995, Quindlen has written several bestselling novels, and returned to opinion writing with The Last Word column for Newsweek magazine

I sat down with her to discuss her seventh and newest novel, Still Life with Bread Crumbs, but this woman has so much to say and we spent an hour dishing about motherhood, fashion blogs and the politics of our two countries. It was a magical conversation for me because Anna Quindlen was exactly who I’d hoped she’d be; she’s a smart, funny, kindhearted straight shooter, who puts into words so many of the thoughts that chase around my own head.

Here’s a taste of our conversation.

Tell me your thoughts on the phenomenon of Mommy Blogs.

One of the things we discovered about my earliest column, Life in the 30s and its popularity, was the profound sense of isolation that women with small kids felt. And  being able to alleviate that in any way felt like an incredible gift. Alleviate it not only for those women, but also for me. Each time I wrote one of those columns and got the reaction I got, I felt less alone…and I’ve always said I think the point of books and reading is to connect people and make them feel less alone. That’s what I see happening all the time with the blogs, particularly around motherhood issues. You’re sitting there at home and something happens and your first reaction is, “It’s just me. It’s only my kids. I’m the only one who feels this way.” And then you go online and you realize it’s everyone and lots of people have useful ideas about how to deal. To me that’s nothing but good.

What’s it like being a mother now that your children are adults?

It’s fabulous! It’s fabulous! All the things I used to do for them, they do for me. They cook, they clean up afterwards, they recommend books I haven’t heard about that I need to read,  and television I ought to watch. They make me laugh incessantly. They understand me. They indulge me.

I can’t think of a single downside to motherhood now.

As a mother, looking back,  what do you know you did right?

I got out of the way. I was really lucky in that I have pretty strong willed, hyper verbal kids, and the oldest, at a pretty young age said to me — in the nicest possible way — on several fronts, “This far and no farther.” He broke me in for the other two. I have to stress that we had considerable oversight over our children…we were perhaps the harshest disciplinarians among our friends, but the so-called helicopter parenting, or snow plow parenting where you push everything out of their way so there are no obstacles, I didn’t do that. I wanted to, but there was always a certain look I’d get on my face and my daughter would say, “Mommy, don’t call anyone.”

The challenge is you don’t know you’re doing it right until they’re older. You have to take so many of your cues from what they’re like. The tractable low-key kid requires something different from the hyper high-strung kid. I have three kids, and each time you realize you’re relearning the lessons. Each of those kids became different people during the course of their upbringing. Every time you got comfortable it all changed.

In your newest novel, Still Life with Bread Crumbs, motherhood is incidental, less important as a theme in this book than in any of your other novels. What made you want to write a love story?

I hadn’t written a love story before and I hadn’t written a novel with a happy ending before. I watched an interview of Amy Bloom with my oldest son Quin, and in it she said, “Every writer has only one theme and mine is love.” Quin turned to me and said,  “Well Mom if  every writer only has one theme then yours is motherhood,” and I almost said to him , “Well, motherhood and loss.”   Quin did the final copy edit of this book, and he pointed out that motherhood is less a theme in this novel. In my last novel, Every Last One, motherhood was not only as profound a theme as I could make it , it was as dark and punishing a theme as I could make it. It’s almost like this book is a reaction to Every Last One. This is as light as I can be and still be serious. That was as dark as I could be and still survive.

Rebecca Winter seems a very lonely person; an independent and self-sufficient person. She seems so different from what we know of you with your emphasis on the importance of family, and of girlfriends.

I once described Irishmen as the “unknowable extroverts” and I think that there’s a certain type of gregarious person who fills that bill and sometimes I feel like one of them. I’m outwardly very extroverted, but there’s a part of me that wants to be alone. Everything about Rebecca is unlike me, but interesting to me. I don’t know anything about photography. I’m boggled by the idea of being an only child. I know nothing at all (I’m happy to say) about having had a cold and withholding mother, about being divorced. The more I’ve been writing novels, each novel I’ve  written has become successively less grounded in anything approaching autobiography. This is my seventh. This is as far afield as I’ve come from my own experience.

But like you, Rebecca finds beauty in the mundane everyday life of domesticity.

Yes, and I’m also familiar with the phenomenon where critics see your work as less worthy if it’s somehow popular. Rebecca’s work is lionized, and then suddenly when it’s on posters in every dormitory  in every college in America she has somewhat less artistic cred than she had before. That’s something I’ve encountered over and over again.

I have to say Still Life with Bread Crumbs because if it’s not your most recent one then you’re doing something wrong. Also, I really tried to push myself to do something different; tonally and in terms of structure. When I finished I felt like I’d succeeded and that felt like a victory.

Who are you writing for?

I write for me. You really can’t think of audience. The New York Times really taught me to feel that way. You’d go out and an 85 year-old man would say to you, “That column you wrote the other day…I disagreed with you.” Then you’d go to a college and a whole class of students would say, “We’re assigned to read your work,” and you’d think, who am I writing for; the college student or the 85 year-old? And the answer is you write to suit some sense in yourself and trust that that will resonate with a certain wider readership.

How has the internet changed the career of a writer?

I don’t really read what people write about me. Someone gives my novel one star; are they a troll? Are they someone who hates my politics and so has decided to do that? Or are they just genuinely unimpressed with what I’ve done? You just can’t tell or calibrate motive or intelligence or sense. So I don’t read anything unless someone tells me that it’s really smart or illuminating. I don’t read any reviews anymore and it’s been really liberating.

I go online all the time, I just don’t read about myself. I read a fashion website called Go Fug Yourself. I actually correspond with the Fug Girls and that’s great. Maybe once or twice a month I’ll see something and say thank you for saying that that was a dreadful dress! I read Gawker, I read Goodreads to see what people are reading and what’s getting traction, Slate, Salon. I think the very best thing about the internet is that I can read all the London papers every day if I want to.

I re-read your old essays and see how fired up you’d get on topics. What makes you mad today?

Oh so many things! (laughs) I can’t even begin…the fact that the US doesn’t have a single payer universal health plan. The fact that the US is the only developed nation that doesn’t have a childcare system for its citizens. I looked at a piece not long ago that asked what is the best country for a woman to live in, and I thought it was going to be Sweden (I always think it’s going to be Sweden). But it was Canada, and when I looked through everything about maternity leave and health care, I thought, I’m living too far south.

What are you doing with all that anger these days?

(Laughs) I yell at the television while I watch news programs. I don’t feel any urge to write columns again, but I must say, I think if Hillary runs in 2016 I’ll start to get pretty itchy fingers. I don’t think I’ll do anything about it except maybe help her out if I have the opportunity, but that election will be one that could — in the way that the President’s election was in 2008 — be ugly, revolutionary, and thrilling. That’s a good combo for a columnist!

When it comes to feminism, we’re still talking to the women, and telling them how to make the efforts and the changes. Do you think it’s more important to raise feminist boys than feminist girls?

Yes. If you raise an intelligent girl she will become a feminist because of the facts of her own life. Raising feminist boys is more difficult. Raising egalitarian boys. One of the reasons you have to raise them that way is because it’s better for them.  To be in full partnership with the women in their lives will make their lives better, and not just make the greater world better. I get a sense from my kid’s generation that these issues are more egalitarian. That many more young men are saying, “I’ll be the primary stay-at-home caregiver,” because of the way the professions have worked out.  That many more young women are willing to cede the kind of control at home that women of my generation covertly couldn’t give up, which is why some of us wound up doing two full-time jobs at the same time. I think the wheel spins forward. Slowly, but forward.

At the conclusion of our interview I thanked Anna for her time, requested the requisite selfie, and asked her to sign my book. I spent the rest of the day grinning like an idiot because I felt like a kid who has just discovered Santa munching cookies in her own living room. It is a rare and amazing gift to find that our heroes can be real; they can be as smart, inspiring and well-spoken as we’d dreamed they would be, and they can even spend a few minutes dishing about celebrity fashion style with me.