You are here: Home / Entertainment / Breastfeeding Perspectives From Around The World In MILK

As mothers, we all try our best to make the right choices for our babies. But with so much information circulating on what makes one a good mother, it’s no surprise that a lot of us are confused and often overwhelmed. This is especially true when the topic of feeding your baby comes up. Breast is best, we are told, but is it always?

Try to imagine what a difficult task it would be, than, to attempt to understand what it means to be a good mother in terms of feeding in more than one culture. Mind. Blown.

That is exactly what director Noemi Weis has done with her film MILK, a documentary that takes a look how women around the world decipher what’s best for themselves and their children.

The film will make its World Premiere at the HotDocs Canadian International Documentary Festival (April 23 to May 3, 2015) in Toronto. Screenings will take place on Monday April 27 and Wednesday, April 29. 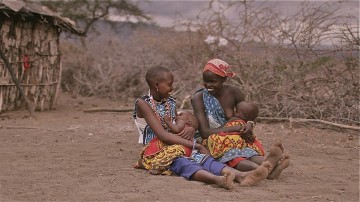 Why, after all these years, are we still trying to figure this whole feeding thing out? There is so much information and yet it still seems to conflict and cause confusion.

All mothers want the best for their babies of course, but they are influenced  by culture, their surroundings, family and society at large. As well, depending on the country they live in, they might have  maternity leave, or perhaps a very short one, or none at all as is the case  in the USA. All of this plays a big role in making the right decision as most mothers are working and either they want to go back to work or they need to work.

And lastly, and perhaps the most important reason, it really depends on the doctor that is looking after them during pregnancy. Some doctors don’t discuss feeding at all. Most women around the world now depend on the information they  find in the Internet, and that sometimes is confusing too. That’s when the conflict starts and women suffer a lot because of that. There is a lot of pressure from all ends and that’s why women are  still trying to figure this out.

When I gave birth to my two children, I don’t recall the hospitals encouraging or discouraging formal feeding, although they were definitely “pushing” breastfeeding. Any thoughts?

Nowadays, most hospitals around the world would suggest breastfeeding as a first choice. The problem starts when the mother is having difficulties to breastfeed and the hospitals don’t have enough staff to support the mothers, so it is easier and faster for them to suggest formula.

The mother is very vulnerable at this time and if she doesn’t have the right information or a good advocate beside her, she will give the baby formula and then when she wants to breastfeed, find that the process is much harder or end up with mastitis as I have heard so many mothers complain about… It is fundamental that all women do the right research and be informed before giving birth. They should be strong to stand up for what they want as, ultimately, it is their decision how to feed their babies.

Some women love breastfeeding and found it very natural. What was your experience like?

I breastfeed my two children and loved it. It was all very natural for me. I never thought of any alternative, although I was a working mom.

Do you think it’s also based on a person’s cultural upbringing? Both my grandmothers thought breastfeeding wasn’t the better choice.

Definitely culture plays a big part in the decision-making. I am not surprised your grandmother thought breastfeeding was not the best  choice as they probably are from the generation that did not breastfeed.

When formula came to be, it was the best thing that was invented for mothers. They were told that now they would know what the baby is taking, they will be able  to measure the intake and they could leave the baby with anyone as the baby would always be fed. There are still cultures, like France for example, who are much against breastfeeding. Now, since the Internet, it seems that mothers have found that [breastfeeding] is better for the baby. These French women are fighting the system and their family cultures.

There is a lot of discussion about brands “marketing” formula but for areas of malnourished women, it seems like a godsend. What other options do they have?

In underdeveloped countries, the best thing to do for those mothers is to  inform them, support them and assist them to breastfeed. Using formula that they can’t afford, plus mixing it with water that is contaminated is a huge issue. According to UNICEF and WHO, there are still over 1 Million babies that die yearly because of lack of breastfeeding. The answer is to have governments add health support for these women,
so they can breastfeed. It is the cheapest, cleanest and most cost efficient way for them. Especially when they tend to use very little formula so it will last them longer…

What do you want us to understand about your film?

There are a few things that I would like to bring awareness to: