You are here: Home / Entertainment / Boy Band? Kinda, but listen up!

If you haven’t heard of the Brothers Dubé, listen up! They’re talented and they’ve got an interesting story…

The Brothers Dubé is one of the youngest alternative rock bands in the world. In the last three years, they have been working with Grammy-Nominated producer Randall Prescott and Kaylen Prescott.

On a personal note, the brothers got their start in music in 2006 at the ages of 6, 8, and 10 in their hometown of Ottawa, Canada after posting covers of their mother’s favourite songs on YouTube to keep her spirits up while she fought cancer. Shortly after her death in 2008, they started drawing crowds to their busking and guerilla street performances on what eventually became known as their Sidewalk Stage. People recognize them as the “Bluesfest Buskers” who were joined by Arcade Fire in 2010 while they were raising money for Haiti. Arcade Fire, who also raise money for Haiti, were headlining at Bluesfest in Ottawa at the time when they walked off their stage, over the security fence, to join the brothers in an improv session singing backup for them. The boys joined forces with Arcade Fire supporting their Haiti mission by matching every dollar they raised. 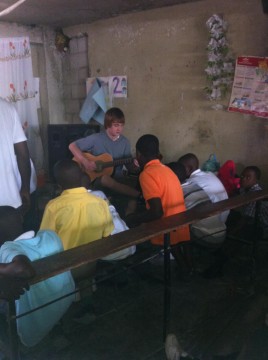 The Brothers Dube – Liam showing how to play the guitar in Haiti.

Through these now legendary street performances, the Brothers Dubé have played hundreds of shows a year in support of numerous charities. They have raised over $150,000 for various causes close to their heart, primarily for orphans in Haiti. In March 2012, they visited Haiti to film a documentary called A Day in the Life, which tells the story of what everyday life is like for an orphaned Haitian child. The Brothers created the film because they wanted to raise awareness in schools everywhere through a musical multi-media performance.

As accredited songwriters with an album under their belt, the Brothers Dubé have played at some of North America’s largest music festivals including Bluesfest, Osheaga, and the Montreal Pop Festival. In addition to this, they also have published works within the music and television industries including a soundtrack spot on the hit television show, Degrassi. 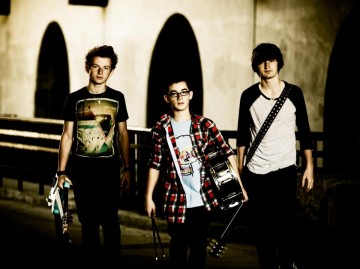 Most recently, the Brothers have officially signed with one of the entertainment world’s premiere music management groups, the Feldman Agency who represents world-renowned artists including RUSH, Michael Bublé, Bryan Adams, the Tragically Hip, Our Lady Peace, Sloan, Simple Plan, and Tom Cochrane, just to name a few.

YOU CAN SEE THEM PERFORM THIS SUMMER!

Brothers Dubé will be the opening act for the most iconic summer bands of all time, The Beach Boys, at the CNE (Toronto) this August 17-19. You won’t want to miss them!

Definitely keep an eye on these guys! Visit their official website at www.brothersdube.com or on
Facebook at https://www.facebook.com/TheDubeBrothers