You are here: Home / Entertainment / BOOM! A Generation of Influence

Why should we take a look at the past? Well, it helps us understand where we are today. Most of us weren’t even born in the “baby boomer” generation but we certainly are aware of it, hopefully? For me, it’s the generation of my parents. They were kids at the time and shit happened that catapulted everything into another realm. If you look back, so much happened that was shaped not only by world politics but by pop culture and amazing inventions. It was a generation of firsts… yhe first residential telephone, the first television, the first man on the moon. We already know all of that stuff but what else happened during this evolutionary time?

If you’re at all curious about how this generation moved the world, and you should be, you definitely should go and see Rick Miller’s BOOM. The Gemini and Dora Award-winning actor guides us through 25 years of history, in character, of over 100 of  world’s most influential politicians, musicians and activists. He reminds us of the milestone moments in society like the introduction of processed foods, Tupperware, and cigarettes. How things were marketed to the public was of particular interest.

But what triggered this interest for Miller to serve up this incredible slice of history on stage? After meeting him recently I can tell you that if he was my history teacher, I would have actually paid attention in high school. But for Rick he’s personally fascinated with the stories. He’s not a historian so that’s perhaps a reason why he’s got my attention—he’s a storyteller. Having a chance to meet up with Rick proved to be a fascinating conversation that I would have happily spent an entire afternoon going on about. 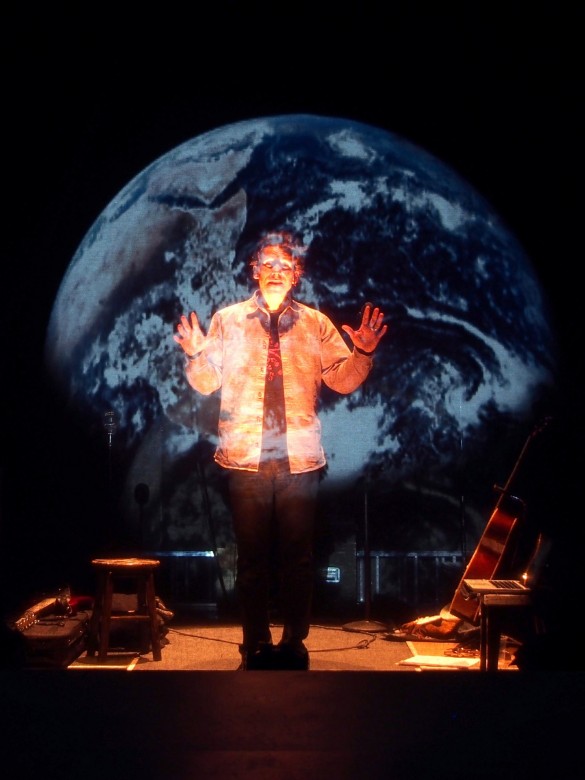 “I think BOOM reflects someone who’s interested in everything,” said Miller. “I’ve always been someone who’s been curious about everything but that also means I’m not the best specialist in the world. I touch on a lot of things.”

As a father of two girls, 12 and 8,  Miller says his kids already recognize that  curious nature in him and he hopes to set a good example. “We are taught to be very boxed in but if I can encourage people, even kids, through this play, and in everything we do, to step back sometimes and see how things are connected, I think we could be better off.”

The show has been in development for three years and Miller had mentioned that all the research and investment, including online, is paying off now with people truly interested in deepening their experience. The public is very much part of BOOM by being able to share their stories at the end of the show and online.

So, what about kids?  “BOOM is for many ages but not for younger kids per se,  it’s definitely great for kids maybe 8 and up. They’re digging history in a way that’s just not possible for a history teacher to be able to do with the enthusiasm. Tieing in music, politics and culture is fun for them to experience.” I would agree. I would think my 15 year old would find it cool to see what Grandma and Grandpa were “into” when they were teenagers and how people reacted to things we take for granted today. I think he’d be pretty surprised.

He explains how once there was a 19 year old in the audience a a preview show in Calgary and during the talk-back segment at the end of the show, Miller asked the teen what he thought about it and being surrounded by Baby Boomers in the audience.  It turned out that the teen’s grandmother had passed away recently and mentioned that he had wished he had seen the show with her because he probably would have talked to her differently. 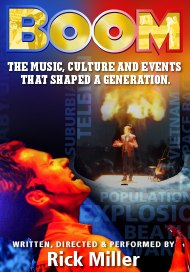 “It’s that kind of emotional connection that brings generations together when we think we’re so isolated,” said Miller. “This is a play that tries to break through barriers and bring people together to look at something that just isn’t about the past but it’s also about today and the future.”

Rick Miller’s BOOM is now on stage at the Panasonic Theatre, Toronto, until February 1, 2015. For more information visit mirvish.com