Jeff Kingsley is on the road to fulfilling his dreams. Literally. This 15 year old fresh-faced teenager is one to watch on the racing circuit. Jeff has been given the green flag to proceed and has already earned the title of Eastern Canadian ROTAX Kart Champion.

Recently I caught up with Jeff at 401 Mini-Indy Go Karts in Toronto for Mario’s Canadian Karting Day, and had the chance to ask him about what it’s like to be a “Karting Sensation” and the transition to becoming a race car driver at such a young age!

When did you start racing?

Jeff: I started Karting at the age of 9 at Mosport. I actually started my love for racing on my Nintendo DS when I was really young. I’ve been playing a few years. My dad actually raced when I was younger. He’s British so he was all about racing and then he got me into karting.

I heard you just got signed onto something big?

Jeff: Yes, it’s the F1600 which are like Formula 1 cars but the open wheel cars and I’m also doing karting this year. Most of the karting drivers are around 18 to 25 years old and mostly European in my class so I’m probably one of the youngest to sign on.

Is it weird that you can be racing but can’t officially have a driver’s license yet for the streets?

Jeff: (laughs) Yeah, it’s strange because I have my racing license for my cars and can be going fast but yeah, I can’t drive on the streets. 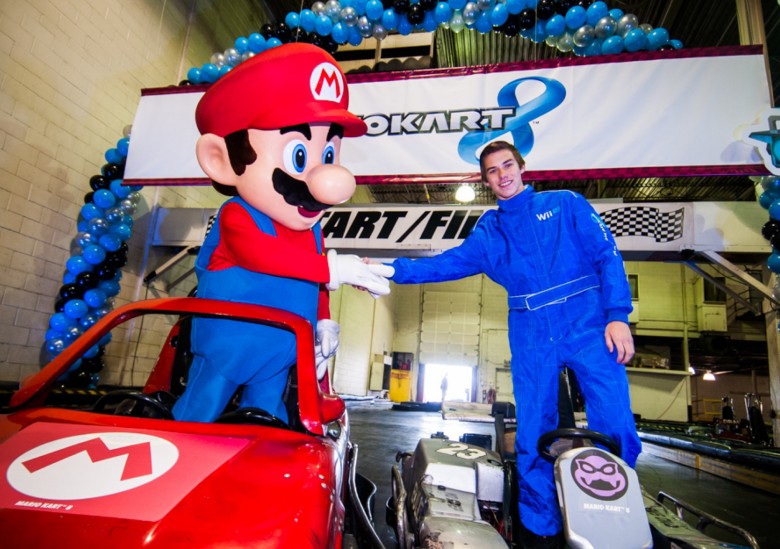 So, how do you deal with school?

Jeff: I’m usually away a lot so I really have to catch up when I come home. Next week I start exams but I need to be in Montreal for the F1 race — I’m actually racing that weekend.

Where’s the most exotic place you’ve raced at?

Jeff: For the cars, I’ve raced in Montreal at the F1, the Indy in Toronto. For karting I’ve raced in Dubai, Florida and New Orleans. Hopefully this year I’ll race in Morocco.

So, what’s your goal?

Jeff: My dream is to become a F1 driver but I need sponsors for that level. Nintendo is one of my sponsors now for karting. It’s very costly. But I’m confident in myself that I can get to that next level.

Do you have any rituals before a race?

Jeff: Yeah, when I’m on the grid I’ll close my eyes and imagine the track and visualize where to break and where to downshift and all that stuff but the adrenaline before you go out just rushes through your body. And my dad picks one bathroom to use at a race. My mom also tells me to “drive safe” and my dad always says “don’t crash.”

When you’re not racing what do you do for fun?

Jeff: Well, when I’m not racing I’m usually at school. I like sports. I use to play Triple A hockey before I started racing. I hang out with my sister. She’s 18. She used to kart too.

So, have you played the new Mario Kart 8 game yet?

Jeff: YES! For sure, have you? You gotta check out the anti-gravity feature. It’s pretty cool! The fact that you can drive up walls and underwater brings a whole new dimension to the game.

And who’s your favourite character? I guess that makes 11 questions lol

Jeff: Mario, for sure! I just want to be like him!