You are here: Home / Entertainment / Games / A special sneak peek at Disney Infinity!
Get ready gamers…you’re about to discover DISNEY INFINITY. At a recent media preview UrbanMoms was invited to get first-hand look at the most ambitious video game ever from Disney Interactive.
As the name says, this game has infinite ways to play. Although I hate to sound cliche, but this game will be fun for kids young and old!
Step right onto the set of your favourite Disney animation world like Pirates of the Caribbean, Monster’s Inc, Cars, and The Incredibles and customize your play with the PLAYSETS or play with your  toys in the virtual TOY BOX.
At first glance, immediate reactions will compare to the very popular Skylanders games. The DISNEY INFINITY starter kit will come with a home base similar to the portal of Skylanders. However, you can bring more than one character to life at a time and power discs can switched around. Take it several steps further and decorate the world in which you want to play. 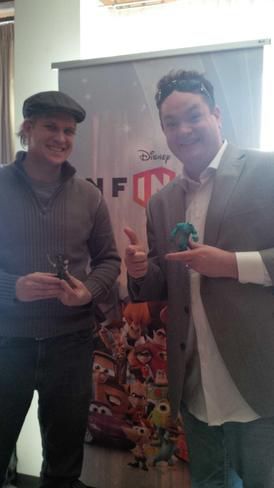 “We wanted to give the gamer an authentic experience in each of the Disney settings,” says John Vignocchi, Avalanche Studios/Disney Interactive. “Each world is taken from Disney animated films that kids and parents are familiar with to give them the feeling as though they’ve entered into that world.”
Each character is also true to their personality. During play, their strengths and weaknesses are what you’ve already know from watching the films. For example, Violet, a character from the Incredibles, is non-confrontational and she has the power to turn invisible. Pretty cool especially when she need to dodge the alien attackers!
PLAYSETS are available by movie theme where players use interactive figures (characters and power discs) to enter and play. Then you’re on your way! Gamers can roam around Monsters University and play pranks on others at Fear Tech University. They can go on a mission and help solve puzzles.Save the planet or overcome obstacles and complete a variety of quests. It’s how each gamer wants to play no matter what age or level.
Unlock virtual toys and add them to your virtual TOYBOX and let your imagination take you away. If you want Captain Jack Sparrow to possess the intergalactic skills of Buzz Lightyear. Just do it! Do you want to create a game of virtual soccer? You can do that too! Want fireworks to shoot off onto the on-screen sky each time you score your goal? Go for it! There are over 1000 toys inside the world to discover and add to your own virtual TOYBOX.
In this play mode, the gamer can also create a universe either by their own imagination or there is a blue print system that will teach them how to build a castle as an example.
The play is truly endless and this is no cookie-cutter gaming experience.
Oh, and by the way, the characters don’t die in this game but they may get defeated in a challenge or mission…but remember they are toys, and this is Disney, so they can be fixed.
DISNEY INFINITY is expected to launch this summer on various gaming consoles including Xbox360, PS3, and WiiU/Wii. Playsets will be sold by movie theme. Additional characters and power discs will also be sold separately to build on the playset.
Visit the official website for more information at www.infinity.disney.com